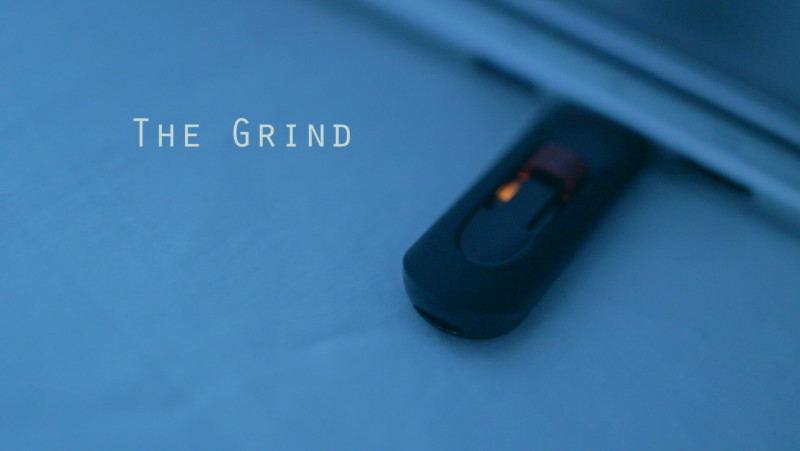 It’s very cool when our friends and colleague of Dark White Media asked if we’d be interested to lend a hand on a film they’re entering for the National Film Challenge. It’s just one of those things I wanted to do… Ok I’ll admit it’s on my bucket list so I jumped at the chance when they asked.
For those not familiar with the National Film Challenge, The challenge is you put together your own crew, and on Friday at 7pm you are then given the instructions of what type of film you are to shoot, what phrases must appear, and it must be done within 78hrs.  And by golly did we get it just under the wire by 9 minutes…
So what is “The Grind”?  To quote the fine folks at Dark White Media. It’s a story about two female assassins who have to juggle their home lives with an important mission to retrieve some sensitive information from a rogue agent. It stars Nicole Marchand, Jennifer Davidson, Mike Saletnik, and Mark Cobleigh (as well as a cameo from Director Anthony Caddigan’s son Brody).
I’ve seen the finished work and it is absolutely spectacular!!!!.  All the stars gave a really dynamite performance, but the real star of the film was Brody. The poor kid was really under the weather, but I tell you he was a real pro and gave a brilliant performance. Ironically some of his part he had to play a kid that was sick, so I had a hard time knowing if it was real or if it was pretend. Yes he was that good. 🙂
So although the film has already been submitted, the creator and director wanted to make some corrections to the film before releasing it to the public (you can click on the image that will take you to their blog as to the reasons why). When the film is ready, you can bet your sweet pippy that we’ll immediately alert everyone.  In the meantime, you can take my word that it’s really good. Then again if you don’t believe me, you can just wait till it’s online…

Well gotta go and get back to “the Grind”.. (yeah I couldn’t resist ending it with that tag line. 😉 )