Recapping the NEDMA Conference and other thoughts

We’re proud to introduce Clint Porte to the team as our Production Assistant. Along with providing support with our production work, Clint’s chief task will be to provide insightful content within our industry and some BTS (behind the scene) report for the Sha La La La website with his unique perspective.

Here he presents a recap and offers his thought on the NEDMA Conference.

Clint Porte, hails from Chicopee, MA and is a recent Political Science Graduate from Tufts University. When he’s not tied up cranking out thoughtful content driven pieces for us, on his free time he enjoys producing music and writing fiction.

As a first time attendee of the NEDMA conference, I couldn’t help but be impressed by the professional networking environment of the whole event. At 250+ people, it was clear that the New England Direct Marketing Association’s scale and influence had increased over last year’s smaller event. The unique mix of artists and businessmen and women, along with the ideas exchanged by them, made it extremely worthwhile to be a guest from start to finish. Most companies in attendance had informational booths set up, with souvenirs and info-packets free for all to share. Everyone in attendance was friendly and willing to listen.

Many exhibitors engaged their visitors with small presentations or items. By the end of the day, I had collected a ping pong ball, marching green soldiers, a three-foot ruler, headphones, a stress ball, and special edition U.S. Post Office envelope. At our booth, we gave out business cards strapped to M&Ms, in an effort to appeal to stomachs and minds simultaneously. We ended up moving over 2 whole boxes of candy. The friendly exchanges of small, yet interesting objects facilitated both small talk and business-oriented conversation that were natural.

A particularly interesting booth was Evergage, a marketing website optimization company, who offered a quick survey that asked if your company had designed a website that adjusted to each consumer. A cool feature of website optimization is that it looks at how long a consumer views a page, what kinds of links he or she clicks, and other vital statistics. Using this information, a website can algorithmically automate a page that displays what the user most likely wants to see. I took the survey myself (no pressure, of course), and answered each question while pretending to own my own website. Upon completion, it became obvious that I had a lot of catching up to do.

Keynote speaker, Anthony Phalen, conveyed a similar theme for marketing strategies in today’s commercial environment. He spoke of how important it was for marketers not to cater to consumer expectations, but to their own. He advised everyone in the room to pretend to be the consumer, and design a market strategy that they themselves would want to see or experience. For example, imagine you are a twenty-five year old urban professional who bikes to work at 8 o’clock a.m. and works until five with only a short lunch break in between. From there, you bike home and settle into your evening routine of cooking dinner and watching multiple shows on Netflix. Maybe after Netflix, you read a book or a blog, or you go online to catch up with friends on social media for a little bit before bed. Depending on how frequently you do these things, marketers have limited time and opportunity to reach you, the audience, in the most effective way. In that sense, Phalen essentially suggested that marketers personalize and craft meaningful advertisements that stand out amongst the routine of someone’s day. Whether it be a clever, expectation-defying message/slogan, a vivid series of images, or a witty video, placing yourself in the shoes of today’s consumer, who more than ever, seeks to sort through the informational clutter of the 21st century, was of utmost importance.

Working with Sha La La La productions gave me some unique perspective amongst everyone at the conference. Being the only video production and video marketing service company exhibiting, our booth quickly became a notable spot. Some of the conference’s more artistic types (singer-songwriters and television personalities, among others), visited and discussed many of the filmic/visual elements of marketing that weren’t otherwise accessible at other booths. It was after a few of these encounters that I began to realize just how special the film medium could be for marketing. Most people like movies or TV. We’re always looking to be entertained, even if only for a moment. What catches our eye is a film which, within the first few seconds, declares it’s tone, content or look in a way that connects with us. It could be grainy or clean visuals, comedic film, or a particular product that grips us and keeps us watching. These are all elements of film style.

And so, film, being heavily based style, creates an aesthetic that leaves an impression on the viewer, and ultimately carries an important meaning. The reason “mise en scene” — everything put in front of the camera — is especially important in marketing, is that everything from body language to props and lighting, draws on the memory, expectations and shared experience(s) of the viewer. A successful marketing video is one that targets the viewer with a style and “mise en scene” that fall in line with a target group. In short, what would it mean to produce a marketing video in line with Phalen’s philosophy? It would probably mean finding even newer and more unique ways of creating and stylizing video to interest the consumer. In that case, maybe it’s something worth giving a shot.
Clint

(If you have a question or comment for Clint on his article,

you can reach him at [email protected]) 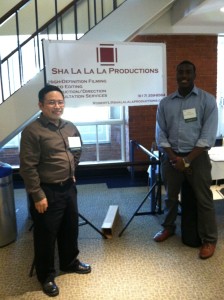