Hey everyone, I’ll admit that things have been pretty hectic and challenging, so it’s neat to share this with you.

Tom Snyder, the Director and creator of Explosion Bus, had sent me a special invitation to the screening of his movie “Destiny’s Detour”. The film was held at the Brattle Theatre in Cambridge MA. I thought it would help get my mind off of all the crazyness at work and wanted to show my support to him and the crew.  I later learn from one of the producers (my good friend Katie Covett, the Explosion Bus’s brilliant producer and she may or may not confirm the film editor of Destiny’s Detour) that they had given me a movie credit as a videographer.

It blew my mind in that it was an animation movie, and what I had worked on for them was a kickstarter film. I didn’t think what I did was relevant but they didn’t see it that way.  In any case, when the credits rolled, I saw my name in big bold white letters “videographer  Robert Lee”   I wish I had taken a photo of the credit, but I did take a picture of Tom taking question with some of the talent, Tom Leopold and Jonathan Katz as a momento.  You’ll have to pardon the image, it was from my old Iphone4, Had I known, I would have used a better camera… 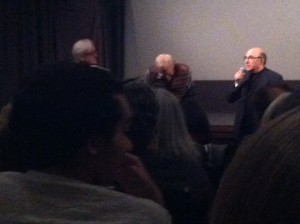 I thought I had some poignant moment, or special point to make, but really it was just to say it was nice to have an unexpected surprise come for me when I needed the most. Boy did I really need it.
Come to think of it, I should really find out if the film is online or if they’re selling the DVD’s. Guess I have something else to look forward to, after I type this last sentence.  In the meantime, enjoy the nifty poster they released in promoting the film. 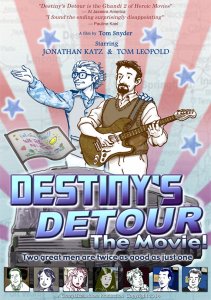