Doctors makes the worse patients? Ok, I can see how that’s true.

We are our own worse critics?  Yep – I agree with that one from my experience.

Could you imagine directing Martin Scorsese in a movie? That would seem like an impossible task. If I said, “Hey Marty, could you give me a little more emotion?” I could only imagine the dirty looks.

There can be a difference of opinion on how a project can be shot provided there is healthy communication between two professionals and understanding the other person’s point of view and experience goes a long way in a successful shoot.  Here’s an example of what I mean. Last month on behalf of another production company outside of Boston, we were asked to shoot a Kickstarter video.

The kickstarter video features Directors Trevor Bailey and Bill Singleton. The goal was to raise funds for their film Fade to Black, the Trigger Effect and outline what help they needed to roll the film out nationally.

Prior to filming, we had a chance to look at the film production’s website and speak to Trevor and Bill about our plan for the shoot.  Through our dialogue, I was able to see how experienced they were in the art of film making and direction.  It let me know that I had the freedom to toss around terms or phrases such as keylight, medium shot and blocking and know that they would understand what I meant. 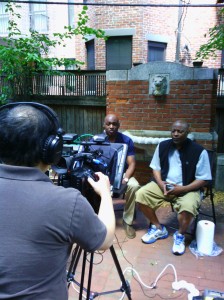 This allowed me to focus more on the shoot itself and capturing their message effectively.  During the shoot, the collaboration continued as we dealt with tricky lighting, ambient noise (always a problem in urban shoots) and other issues. They were very open to trying different angles and approaches in capturing the right shot. Plus we had two extra hands when we needed to move the set around. Without having to explain, they understood the reasoning for moving the height of the teleprompter and re-working the positioning of the seats in fighting the bright sun. As fellow directors, they shared the motto of “doing whatever it takes” to get a properly composed shot.

Sometimes there can be too many cooks in the kitchen, but sometimes when you get two different cooks working together, the result can be a wonderful and tasty fusion, like a Recess Peanut butter cup, or like how the kickstarter video all came together. Here’s how it came out. 🙂